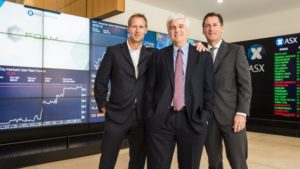 CFOAM directors and management were buoyed by the debut of the carbon materials company which supplies the US Navy and Virgin Galactic. (left to right) Toby Chandler, director, Michael Placha, managing director and Gary Steinepreis, chairman. Jessica Hromas

CFOAM, which makes the high-strength carbon at a plant in West Virginia in the United States, raised $9 million in a float at an issue price of 20¢ per share. But on a day when the broader sharemarket tumbled, CFOAM jumped sharply. After opening at 60¢, it closed 250 per cent higher at 70¢.

Toby Chandler, a non-executive director, said the company had opted to list on the Australian Securities Exchange rather than exchanges in the US because it was a much better fit for a company which had already validated its technology and was making a product.

“The ASX was the right one for a company which has a mature and validated technology,” he said.

He said CFOAM had a number of new contracts on the horizon and the high-strength carbon material was well-positioned for the digital age because of its high-performance attributes which are sought after in the aerospace, industrial, military and electric vehicles sectors.

It was up to the company to deliver on the enormous promise of CFOAM, which is produced from powdered metallurgical coal using a specialist manufacturing process. The CFOAM is extremely strong but lightweight.

Aerospace tooling was a growing market, while the CFOAM product also had applications in the global lithium-ion battery market where advances in electric cars and green vehicles by pioneers such as Elon Musk, who runs Tesla, are rapid. Mr Musk also runs the ambitious SpaceX company, which is developing spacecraft and rockets with mixed success.

Mr Chandler said CFOAM could be used as a replacement for titanium alloys and high-strength aluminium. “They can all be disrupted by CFOAM,” he said.

He said the company had 27 patents over the manufacturing and end-use applications of a range of CFOAM products. They provided substantial barriers to entry for rivals across the globe.

Mr Chandler said customers included the US Navy, the North American aerospace and defence technology firm Northrop Grumman and Virgin Galactic, the commercial spaceflight business which is part of the Virgin Group. Virgin Galactic has ambitious plans to eventually run commercial spaceflights and aspiring “astronauts” pay an upfront fee of US$250,000 ($325,000) to be part of the operation.

Jett Capital was the manager of the IPO for CFOAM.